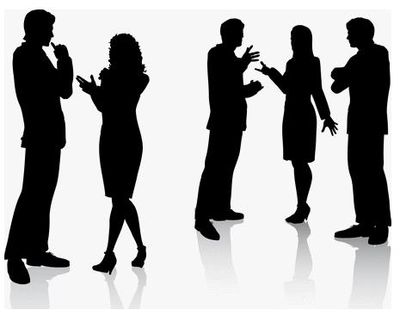 “The key to being a good conversationalist is probably a genuine unselfish interest in others. That, and practice.” -Frank Crane

A lot of people have a difficult time with conversations with strangers, even acquaintances. I know I do. As Cal Fussman once penned: “We all know the feeling of wanting to do something so well and so badly that we try too hard and can’t do it at all.”

20 years since speech therapy lessons in 3rd grade for my stuttering and stammering, I still find myself talking too fast. I mumble. I make jokes no one can hear, then laugh awkwardly to cover it up. People rarely laughed during conversations with me — they were busy trying to understand what I was even saying.

For a long time, I decided it’d be best if I said as little as possible when meeting strangers (plus, that way I could increase my “mysterious” factor).

But I’ve worked hard to become a better conversationalist. I find I can make people laugh easier than before. I might still stutter (still working on that) and I still have trouble pronouncing “remember” and “statistic.” But for the most part, I feel comfortable and calm in conversations.

Before, I Was Bored. Now, I Give All My Attention.

In the past, I’d gauge my interest in a person within seconds of meeting them. If I found them boring, uninteresting, or weird, I’d mentally decide, “This conversation will go nowhere. How can I get out of this?”

The truth is, people are hyper-sensitive to this rudeness. You can’t fake interest in a conversation without the other person knowing. You can always be polite and discuss topics more for the other’s benefit.

But if you want to be a great conversationalist, you can’t be rude. People know.

Instead of trying to extricate myself out of a conversation, I approach every conversation with intent and attention. I face my feet toward them (it’s a dead giveaway when your feet or facing away, you look like you’re ready to run). I look them in the eyes, and I give genuine eye contact and interest.

Frankly, I still get bored during some conversations. That’s bound to happen. But it’s no excuse to be rude. Entrepreneur Tim Ferriss put it this way: “Treat everyone like they can put you on the front page of the New York Times.”Someday, you just might run into that person.

I used to think there was always a more interesting person to talk to, so I would always be looking for an out, worried I’d miss it. Now, I don’t focus on what else is out there or let any feelings of FOMO dictate how I feel. As James Altucher once wrote: “I am where the party’s at.”

“People Pleasing is a Form of Assholery”

If your primary method of conversing involves flattery and pandering, you’re on track to be a bad conversationalist.

This was another crutch I used. In efforts to connect and bond, I’d just compliment the other person in every possible way, hoping they’d like me. But it was disingenuous. Looking back, most people noticed immediately, and I rarely made any real connections.

People don’t want empty praise or generic kudos, they respond to a real connection and honest conversation. As Emmy-nominated comedian Whitney Cummings once said of people-pleasing:

“You’re not pleasing anybody. You’re just making them resentful because you’re being disingenuous, and you’re also not giving them the dignity of their own experience. It’s patronizing.”

You’ve probably been guilty of over-flattering; we’ve all been there with our boss, our in-laws, a cute stranger. One time, I met Steve Forbes at a cocktail party and I was the most kiss-ass suck-up you’d ever seen. I doubt he remembered me despite my endless praise of him.

If you want to be a great conversationalist and create genuine laughs and connection: don’t flatter. Don’t pander. Be honest and frank.

There’s only one you, and that’s what will make people interested and attentive.

My One Strategy to Leave a Bad Conversation

Sometimes, you just need to leave the conversation — the person is rude, oblivious, maybe just incredibly chatty. These conversations are hard to leave once you get sucked in.

I learned the following strategy in counseling, of all places. I was in a group setting where we were all allowed a 2-minute slot to share, though many went over their time despite hearing the timer. As the timer went off for me, the lead counselor interrupted, “and on that note…” signaling to me that time was up. I was surprised and caught off-guard. But it worked.

I’ve used that strategy for myself, too. The other day, I was chatting with a new acquaintance who was very excited about penny stocks and the trading in the stock market. Despite my obvious stepping away, turning to leave, and other cues demonstrating I wanted to leave, he excitedly kept talking my ear off about selling short and studying market research.

“Great! And on that note, I gotta head to dinner!” I interrupted with a big smile. He apologized and said goodbye. He wasn’t trying to be rude; he was just oblivious.

This is true for most people who talk a lot — they rarely intend to be rude or selfish, they just get caught up in their own world. That’s another important lesson I learned: most talkative folks respond well to a polite interruption saying you need to go somewhere else.

Don’t patronize a chatty talker (and resent them for not shutting up) — communicate your need to leave, and they’ll usually respond well.

“All confidence is acquired, developed. No one is born with confidence. Those people you know who radiate confidence, who have conquered worry, have acquired their confidence, every bit of it.” -Dr. David Schwartz, The Magic of Thinking Big

A lot of people struggle with self-confidence and self-belief. When you lack these traits, you express that lack in other ways, like needing others to “choose” and like you. This is a foundation for mediocre conversation, all the time.

It was for me. Growing up, I had virtually no self-confidence (especially not in my speaking ability). I had this constant need to be liked and chosen, and it came off as desperate and awkward. I was so busy trying to get you to like me, I was never myself.

If you can relate, I had good news for you: all confidence is developed.

No one is simply born with enormous, unshakeable confidence. You can develop and build your self-confidence over time, which will become apparent in conversations and your ability to make people laugh and smile. But it’s a rare trait. If you decide to become one of the few who develops this, your conversational skills will improve immensely.

Some easy strategies to start with:

There’s no end to developing your confidence. Remember, the best speakers, the most clever conversationalists, and most confident individuals learned those skills over time. You can, too.