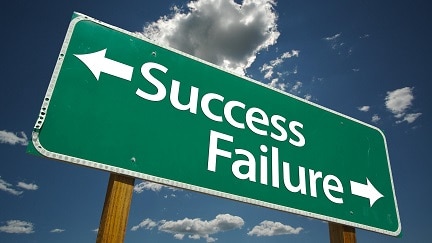 Imagine 100 people who all want exactly what you want out of life.They’re all just standing in line.Now imagine that the person at the front of the line is a rockstar. He’s a stellar success. A household name. Like — the kind of success that everyone else in line aspires to. He’s the top 1 percent.And imagine that the person at the back of the line completely crashes and burns. He is an absolute, soul-crushing failure. He’s the bottom 1 percent.That’s the winner and the loser. The one percent, on both ends.Now imagine that there are nine others on each end of the line that come close to winning or losing. They don’t succeed or fail quite so spectacularly, but they do manage it.Now we have the top ten percent and bottom ten percent.

Everyone else — the other eighty people— are all fighting for their position in the middle.
Take this in for a minute: There is far more competition for the middle than there is for the top (or the bottom for that matter.)Most people spend their whole life learning how to be somewhere in the middle and just . . . stay there. Forever.

Let me give you an example.
I once had an awkward conversation in my gym’s hot tub with a mentor from my university’s undergraduate program. She told me that there was no way, under any circumstances, that I’d be able to get a job teaching creative writing at the university level with the degree I was just finishing up.She has a degree from Yale and it took her three years to get her position. And even if I could get a job, the pay is pitiful.My best friend has been an adjunct creative writing professor for more than five years and he earns something like $10,000 a year. Let’s just say — not a living wage.Meanwhile? I started my own creative writing school in 2016 and this year I’ll earn more than $100,000. I project that I’ll earn close to double next year.

Imagine that you are one of those 100 people.
You all are starting from square one, with the same goal: to become online entrepreneurs.You’re all trying to get your email lists up and running, validating your minimum viable products, starting your websites, all reading the same gurus, all taking the same courses and listening to the same podcasts.Eventually someone is going to crash and burn. It’ll be ugly. And nine others just aren’t going to get their businesses up and running. They’re going to quit.Sadly, we can’t help them.That leaves us with 90 potential online entrepreneurs. Somewhere in that 90 are the ten people who are the top 10 percent.
﻿
I have a secret for you.

If you want to do something extraordinary, you aren’t competing against the whole world. But that’s not the secret.You aren’t competing against the middle, either. That’s 80 of those 90.You’re only competing against the other people who have done the work to get to the level of competition that rises above the middle.If we go back to that line of 100 people who all want to be online entrepreneurs — one of them is going to be the Seth Godin of the bunch. And nine others are going to be similar superstars. They are the top 10 percent.While the other 80 people are fighting each other for position, these folks figure out how to rise up. And actually? It’s not complicated.It’s not easy either. Just not complicated.The people who rise to the top:
Do the work. (This is huge.)Don’t give up.Keep learning.Roll with the punches — they change when things aren’t working.Are willing to be uncomfortable.
That’s about it. Really. If you don’t believe me, go crack open a book written by someone who is in the top 10 percent of pretty much any industry. It’s not about gimmicks or strategies or luck.Sure, they’re in the right place at the right time — but that often happens because they’re busy working when the rest of the middle isn’t. So much of success is just being the guy who sticks around long enough to be there for it.
This is real life, so obviously there are extenuating circumstances.
Not everyone is born on an even playing field. Some are born into the 1 percent (or ten percent) and only need to hold on to it. (Only a couple of guys get to be born Stephen King’s son, for instance.)Others are are born in the gutter and have to fight their way out of it if they can. There’s illness — physical, mental — and genetic blessing. There are lucky breaks and bad breaks.But the truth remains that most people get to a place of relative comfort and stick there. Or they have an idea in their head of what success means and it’s hard to shift gears. (That Yale-trained professor might struggle to believe that I’m the one in the to 10 percent, for instance.)They are either unwilling to do the work to rise out of the middle or they are blind to what that work entails.As a result, they compete for the middle and stop when they get there. And that’s okay. There isn’t anything wrong with that. Truly, the 80 percent makes the world work. Someone has to do that work.If you want to reach the top ten percent, though, (and Stephen King isn’t your dad) you have to make your way past the midd

Is a Cyber Pandemic’ Coming? By Dan Lohrmann
Scroll to top