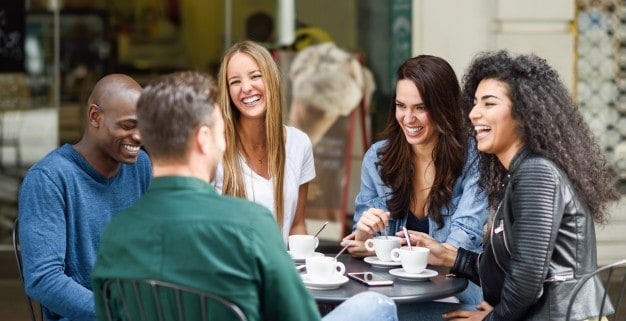 Some people are simply a joy to be around. The conversation flows effortlessly. You laugh. You’re genuinely interested. You look forward to seeing them, and when you part ways you feel like their company was a valuable use of your time.

Obviously, this connection has partly to do with how much you have in common, but I think there’s more to it than that. This person usually has a secret ingredient.

Understanding your mindset
According to psychologist Carol Dweck, a person’s mindset can come in two flavors: fixed and growth. By understanding the difference between the two, we can shed light on why some people are better than others at showing us a good time.

In a nutshell, someone with a fixed mindset believes we are what we are, and that things — meaning personality traits, capabilities, beliefs about ourselves, etc. — don’t really change. For example, with a fixed mindset, if I’m bad at maths, then that’s just the way I am. I’ll always be bad at maths. There really isn’t any point in trying to improve my skills. If I believe myself to not be a funny person, then that will continue to be my destiny, etc.

On the other hand, an individual with a growth mindset believes in constant evolution. I am what I am now, but that’s different from what I was before, and what I will be in the future. If I’m bad at maths now, I can work at it and potentially become a maths genius — given the proper motivation, of course. If I don’t find myself to be very funny now, I can practice my joke-telling skills and comedic delivery, and maybe I’ll have them rolling in the aisles one day. Everything is a matter of effort.

Some people tend more toward a fixed mindset and others toward that of growth, but it’s not entirely binary. Most of us will shift between the two outlooks depending on our situation.

The way we evaluate our personal sense of worth, success and ability differ depending on our mindset. The fixed mindset individual judges themselves against others. In order to feel good at something, they have to be better than everyone else around them, or at least somewhere near the top. When this is the case, fear of failure is ramped up, and they’ll be likely to shy away from challenges, even — in fact especially — in the areas they consider themselves gifted. This is because any failure suffered threatens to jeopardize their “talented” status. One slip up and they’re no longer the genius they, or others, thought they were. Better to not risk it at all.

Furthermore, this mindset breeds arrogance, because — looking down from their fiercely protected spot at the top of the heap — a fixed mindset individual genuinely feels superior to the people they surround themselves with. In fact, they need to think in this way in order to feel of worth.

The growth mindset individual though, will feel successful, worthy, and purposeful when they’re learning. What this essentially means is that failure, as a concrete idea or our general understanding of it, doesn’t really exist, because the harder a task or an undertaking is, the more we stand to grow as a result of doing it — even if we don’t do it perfectly. With a growth mindset, we welcome challenge because instant success and recognition are not the ultimate goals.

Needless to say, in the long run growth-minded people have the potential to go further, and grow bigger, in all aspects of their lives.

So how does this apply to being great company?
Some fixed-minded people tend to act in a way that can make us feel small, and they seem to relish that outcome. They’re the ones who smirk when we slip up, the ones we wouldn’t want to show an unfinished project to, or see us in tracksuit trousers and a battered t-shirt first thing on a Sunday morning. They’re the ones we wouldn’t want to say anything stupid in front of, and if we did, we would feel the need to justify ourselves to save face.

If someone slips into a fixed mindset, suddenly everything and everyone around them begins to function like a mirror. They’re forced into a perpetual state of self-referencing. They ask: “How does this friend, topic, job, choice of music, etc. make me look?” And it can be contagious. Like a bitchy, competitive group of school children, everyone around a fixed person can catch the bug, and end up falling into an uncomfortable pattern of one-upmanship, which can quickly turn ugly.

So a fixed-minded friend can be uncomfortable to hang out with because they have the potential to handicap our growth as well. Anticipating judgment causes us to take up a defensive stance, and because we’re busy protecting ourselves, we hold ourselves back. We can’t take on risk when we’re under threat. We can’t stretch ourselves when we’re fearfully clinging to a sense of self-worth that seems to suddenly be under fire.

On the flip side, there are really good times to be had with those who make us feel comfortable enough to explore. When we’re with growth-minded people, were present. A freedom to engage more fully develops out of liberation from any need to check or contain ourselves. If someone we’re with is in a growth mindset, we can sense their abandonment of the concept of failure, and so we can be infinitely more comfortable in making mistakes.

Additionally, because growth-minded people don’t have to look in those proverbial mirrors all day, they’re better able to see the Other, and they’re able to connect with those around them in a much more authentic way. In the company of this kind of person, it’s easier to feel understood and welcome. And when we feel accepted, we can let go of our own need to constantly self-reference. Suddenly, the space between two people becomes the focus, and is more easily filled with meaningful conversation or activity or whatever else it might be that we can learn the most from at that time.

With competition off the table, growth-minded people feel genuinely happy for our successes, and we can feel unconditionally proud of theirs too. These are the people whose good moods lift us up. Their bad moods may not be completely absent, but they seem rare and don’t drag us down with them. They’re the ones who will ‘like’ your stuff on Facebook without feeling like they’re handing over some of their power.

Some of my oldest and greatest friends are exactly like this, but having a growth mindset is not a quality that’s reserved only for people we know inside and out. Generally, you can sense it in a person the moment you meet them. And this isn’t just because they’re pandering to you, either. It’s not necessarily only the people who wouldn’t criticize a work in progress, or laugh at the stupid thing you just said. But rather, when that stuff happens, we don’t feel as if they’re mentally removing chips from our worthiness stack.

For people living in the developed world — meaning those of us for whom basic survival isn’t an enormous challenge — our deepest worries seem to spring from questions regarding our adequacy; our good-enoughness. But good enough for what? Or, perhaps more importantly, for whom? When you really ask yourself that question, it usually boils down to comparison and other people’s perceptions, in one way or another. At the root, our greatest fears concern our likeableness. Our lovability. And it’s those fears that can freeze us into a fixed mentality.

So there’s a sad irony to all of this. Although fixed people can come across as arrogant and superior, it’s often a deep, and sometimes unconscious, insecurity about themselves that causes them to behave in that way. What this means is that the people who compete with others are usually doing so out of a desire to feel worthy of those same people’s admiration, love or attention. But of course, by striving for connection in this way, they’re far more likely to achieve the opposite.

You can be truly great to hang around with when you accept yourself as an evolving entity. Be comfortable with the fact that you’re growing, not grown. What I’m not saying is that you have to be 100 percent self-assured to be fun to know and be around. That would be a daunting ask, and overconfidence is usually a trait that belongs to the fixed category anyway. What I am saying is, being enjoyable to hang out with has more to do with being comfortable with your vulnerability. It’s about being able to let your guard down because you know that your weaknesses don’t define you.

If mindsets are contagious, then there’s no real way to know who caught the fixed bug first in any relationship. It could have been you, or it could have been them. But awareness of the two mindsets, as well as your own thought patterns, means that you have the potential to dole out the antidote as well as the ailment. By adopting a growth mindset, you can put a stop to the epidemic and inspire others to grow with you.

So take yourself less seriously because your imperfections are the things that people really connect with. Learn to laugh at yourself and enjoy the fact that others can do the same. Be the student, not the teacher. Ask questions when you don’t know something, and don’t worry so much about f*cking things up. In the end it means that not only you, but also anyone you spend time with stands a better chance of enjoying life.

A book on the psychology of self-sabotage and how to take control.
Order it now on Amazon. https://www.amazon.co.uk/Fight-Lessons-Battles-Won-Lost/dp/1473662443